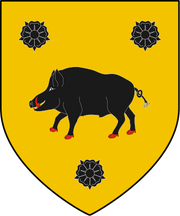 the Everec coat of arms - symbol of the Company

The so-called Redanian Free Company was a fighting unit in the Redania's service. Its members were more known as the Wild Ones, owing to the boar[1] in their coat of arms, which was adopted from its leader's family symbol.

They are modeled after Cossacks and even call their leader ataman.