From Witcher Wiki
(Redirected from Radovit II the Bold)
Jump to: navigation, search 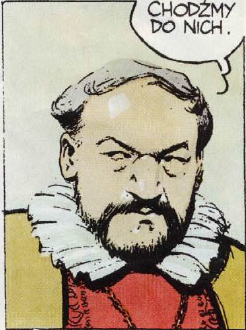 Radovit II the Bold (Polish: Radowit II) was a king who the "Zdrada" graphic novel.

Radovit was bankrolled the functioning witcher schools of Cat and Wolf. Due to the promptings of the representatives of druids and his court counselor, sorcerer named Astrogarus, he organized the ambush. During the tournament which official purpose was to compare skills of witchers of the both schools, Astrogarus ordered Cats to kill Wolves. A moment later Radovit ordered his soldiers to kill all witchers in the arena.