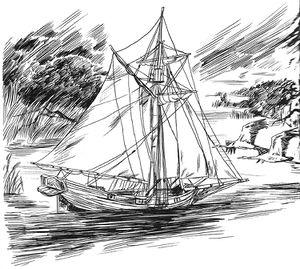 The ship on illustration from Czech edition of Season of Storms

The Prophet Lebioda is a modern sloop in the Koviri style, built in Novigrad, launched less than a year prior as the Melusine, but later renamed to its current name. It is sixty-four feet long, the total sail area is 3300 feet. Single masted, with a gaff mainsail at the back, a headsail and two jibs on the forestays. The ship belongs to Kevenard van Vliet, a businessman in the tanning industry. On the flagstaff is suspended a flag with a glove, the emblem of his firm. The captain of the ship is Boxcray.

The figurehead, instead of the standard busty woman, mermaid, dragon or sea serpent, shows the Prophet Lebioda as a bald grey-bearded man with a hooked nose. Before being renamed, it featured Melusine, but Kevenard decided to change it in order to please Novigradian priests.