Throughout Chapters II and III of the game, there are posters plastered about both the Temple and Trade Quarters. This is a gallery of those posters. Some of them are Polish historical, political and pop culture references or references to Sapkowski's books. Viziman interiors are decorated as well.

These are found at Detective Raymond Maarloeve's house and also at Tobias Hoffman's house:

There are a number of posters plastered around the various locations in The Witcher 2: Assassins of Kings.

In The Witcher 3, there posters nailed to trees and also on city buildings and walls. Some advertise businesses and services and others are for general information. 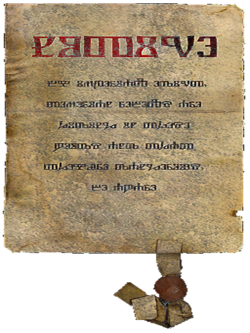 Bandits calling themselves "Temeria's Soldiers" are hiding in the nearby woods. They have been declared outlaws and a threat to the Emperor's subjects. Assisting or sheltering them in any way will be summarily punished to the fullest extent permitted by imperial law.

On behalf of the Emperor of Nilfgaard - Captain Peter Saar Gwynleve

Some backstabbing cowards have deserted Crow's Perch and now prowl these lands in small bands of a few yellow-bellied cutthroats each.

Travelers passing through - keep on your guard.

By order of the commander of the Nilfgaardian Army Group 'Center' camp:
Residents of the villages of Midcopse and Blackbough are hereby required to report to the camp near Midcopse in order to perform labor for the Empire. Those caught evading their duties shall be flogged.
Lists of designated residents and their assigned days of service have been provided to the village ealdorman.

By order of the commander of the Nilfgaardian Central Army camp, the residents of Claywich and Oreton are hereby ordered to report to the Wastrel Manor in order to perform labor duties for the Empire. Lists of designated residents and their allotted days of service can be had from the ealdorman. Those caught evading their duties shall be flogged.

The inhabitants of the villages of Downwarren and Lindenvale are hereby ordered to report to the Nilfgaardian Central Army camp to perform labor duties for the Empire. Lists of designated residents and their allotted days of service can be had from each village's ealdorman. Those caught evading their duties shall be flogged.

Commander of the Central Army camp

A large contingent of traitors has deserted the Imperial Army camp. Their betrayal has made them outlaws and common bandits.

Until the deserters are caught and punished, it is prudent to avoid any and all contact with them.

The Nilfgaardian Court-Martial has found
Dragomir, son of Anastasius
GUILTY
of betraying his oath of loyalty to his new rightful ruler, Emperor Emhyr var Emreis, by eavesdropping on conversations between imperial soldiers while serving in the Central Army Canteen and passing on reports thereof to spies in the service of the enemy kingdom of Redania.
The condemned shall be punished with death by hanging, to be carried out immediately upon issue of the present verdict.