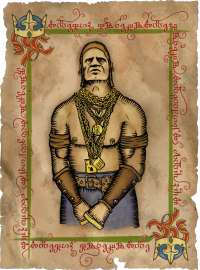 A poster for "Schuttenbach Jewelers" in The Witcher computer game

Percival Schuttenbach was the only gnome in Zoltan Chivay's party. While not as strong as his dwarven companions, he was much more agile and perceptive. It made him an ideal scout who could smell food from a long distance. Schuttenbach was also known as an excellent metallurgist, technician and jeweller. He and the rest of Zoltan's party first met the witcher when Geralt and his own group were making their way toward the Yaruga river from Brokilon, but Zoltan advised them to join him and his men and head eastward.

Other members of the company included:

They all appear in Baptism of Fire, the fifth book and third novel in the Witcher series.

After Zoltan's party encountered Geralt, Dandelion and Milva, Percival befriended Dandelion due to their mutual appreciation for music and cards, though the gnome was a known cheat. After the Nilfgaard Wars, he opened a jewelers workshop in Novigrad, where he used the parrot Field Marshal Windbag as a living advertisement.

In the non-canon short story "Coś się kończy, coś się zaczyna" (Something Ends, Something Begins) he was one of the guests at Geralt and Yennefer's wedding.

In the computer game, a poster advertising "Schuttenbach Jewelers" appears, with the tagline "Where every ring is that special ring...".

The same poster also appears in Side Effects, which takes place before the war with Nilfgaard and thus before Schuttenbach ever opened his store.

Geralt can find Percival Schuttenbach's Shop in Novigrad, but it's closed, as the note on the door says "due to an of incident of a racial nature". It further directs customers to visit the shop on Mount Carbon.