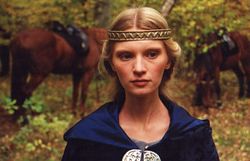 Pavetta Fiona Elen was the granddaughter of queen Adalia and daughter of Calanthe and King Roegner of Ebbing. She was a Source; a descendant of Lara Dorren.

She features in the short story "A Question of Price", in The Last Wish-collection.

Pavetta was bound since her birth to Destiny by the Law of Surprise, for Duny had saved her father's life.

Despite knowing this, Calanthe held a feast for the princess' would-be-suitors around Pavetta's fifteenth birthday. Unbeknown to almost all, Duny had already made her acquaintance a year earlier, though, and the two had fallen in love, so far that Pavetta was pregnant by the time of "A Question of Price".

Ciri, the child she was carrying, was marked by Destiny as Geralt named her as his reward for saving Duny's life. After that, the witcher left.

Years later, Pavetta and Duny were believed to be killed as Vilgefortz caused the ship they were on to sink. In fact, Vilgefortz had been consipiring with Duny to bring both Pavetta and Ciri to Nilfgaard. Pavetta ultimately figured out Duny's plans and arranged to leave Ciri behind with her grandmother, much to Duny's ire. The two then argued and she fell overboard and drowned.

Vilgefortz went ahead with his part of the plan, unaware that things at Duny's end had unravelled so only Duny was magically brought to Nilfgaard in the end.

In The Hexer movie and TV series[edit | edit source]

Pavetta was played by Agata Buzek.