The Witcher (Polish: Wiedźmin) is a computer role-playing game for the PC by CD Projekt RED. Based on the book series of the same name by Polish author Andrzej Sapkowski, the game utilizes BioWare's proprietary Aurora Engine and was released in October 2007. An enhanced edition of the game, containing among other things the editor and two new adventures "The Price of Neutrality" and "Side Effects", was released in September 2008. In the first 10 months since release, the game sold 800,000 copies worldwide. A console version using an entirely new engine and combat system, titled The Witcher: Rise of the White Wolf, was planned for release in Fall 2009, but later cancelled.

The Witcher follows the story of Geralt, a mutant "witcher" — a travelling monster hunter for hire, gifted with unnatural powers. Taking place in a medieval world, the game implements detailed visuals. The natural light during various phases of the day is realistically altered, and the day and night transitions serve to enrich the game's ambience. The weather can dynamically change from a light drizzle to a dark, stormy downpour accompanied by thunder and lightning, and the NPCs react to the rain by hiding under roofs trying to get out of the rain.

The game is centred around Geralt the witcher, also known as "the White Wolf", who at the beginning of the game suffers from amnesia. He gradually learns that he was a very renowned witcher, and that he had friends and enemies almost everywhere, who remember him but whom he does not remember. Through the player's actions, he will redefine those relationships and choose his path in the political intrigue that surrounds him.

The developers have often said that their main goal with the game's storyline was to give choices to the player where there was no clear good or evil, and where the player would have to choose the lesser of two (or more) evils.[1]

Also, the story was designed so that the consequences of the player's choices are often not immediately visible, and may only become apparent a few chapters later. This was done to prevent the "save, choose, reload" type of gameplay that is often used in similar computer role-playing games.[2] 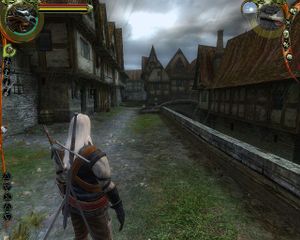 Over the Shoulder view mode

There are three camera styles available when playing The Witcher. The game can be played from one of two top-down perspectives, in which case the mouse is used to control everything, or it can be played from an over-the-shoulder (OTS) view, which brings the player closer to the in-game combat, but limits visibility. In all three views the keyboard and mouse controls can be changed to be primarily mouse focused or a combined keyboard and mouse approach.

The combat system in The Witcher represents a departure from most RPGs. Players choose one of three fighting styles. The quick style allows for faster, less-damaging attacks with a greater chance of hitting faster enemies; the heavy style deals more damage in exchange for a slow attack speed, and a lower chance to hit faster enemies; and the group style, which features sweeping attacks best used if the player is surrounded. The player can switch between the styles at any point.

Each of these stances has its own unique combat style. Both of Geralt's main swords — the steel and silver — have distinctively different combat styles from the rest of his weaponry, and serve very distinct purposes: where the steel blade is used to fight humans and other flesh-and-blood beings, the silver is more effective against supernatural monsters and beasts (some of which may be completely unaffected by steel).

Alchemy is a major part of gameplay. The player can create potions that increase health or endurance regeneration, allow Geralt to see in the dark, or provide other beneficial effects. The recipes for these potions can be learned through scrolls, or by experimentation. Once the player creates an unknown potion he can choose to drink it, but if the potion is a failure it will poison the character. Each time Geralt drinks potions they increase the toxicity level of his body. This can be reduced by drinking a special potion or by meditating at an inn or fireplace.

In addition to potions, the player can also create oils and bombs, respectively used to augment the damage done by weapons, or as weapons in combat. Neither can be created until talent points have been allocated into the corresponding skills.

The soundtrack for The Witcher was composed by Adam Skorupa and Paweł Błaszczak. In some editions of the game (see: list of editions) the soundtrack CD is included with the game. It consists of 29 tracks with the total length of 73 minutes 13 seconds.

An additional CD, Inspired by The Witcher, featuring e.g. Vader is sold separately in some countries and also included with the game in some editions.

Both soundtracks are included in the Enhanced Edition.

At the 2008 Game Developers Conference in San Francisco, CD Projekt Red announced an enhanced edition of The Witcher, which contained a great number of technical upgrades, as well as a lot of new features.

All the female portrait cards shown after Geralt's "conquests" were retouched to a more modest standard for the US release version. The in-game Dryad was also reskinned so her hair covered more of her body in this release.

Colourful dialogue between characters was cut in the English releases — not merely the US release — especially through shortening of dialogue. Lead Designer Michał Madej has disputed claims by fans that this was due to the sometimes crude language, but that the decision to edit down dialogue occurred because of production-related concerns in game development. Proof reader Martin Pagan noticed this shortened version during his work and writer Sande Chen confirmed that it was not due to censorship. Fans have theorized that it may have been done for voice acting cost savings, especially since much of the vulgar language has been retained. Such cost savings would normally occur during any shortening of dialogue, even in cases where no major crudity was involved. To unlock the long version of the dialogues (text only), see: Unlocking original dialogues.

The Enhanced Edition, how ever, contains the originally cut dialog with full voice acting.

The following table lists the contents of each of the various editions in addition to the game DVD itself. Help us by adding information about missing editions!

The Witcher: Rise of the White Wolf was to be a console role-playing game set for release in Fall 2009. The project has since been cancelled. While it was to feature the same story as The Witcher PC game, it was to use a new engine, created in cooperation with Widescreen Games, and a new action-based combat system.

Several spin-off games have been created either by CD Projekt or on the license from CDP.

The Witcher: Crimson Trail (Polish: Wiedźmin: Krwawy Szlak), also known as The Witcher Mobile is a mobile phone action game created developed by Breakpoint on the license from CD Projekt. It features Geralt in his youth as a promising young student, has just completed his training to become an elite monster slayer — a witcher.

The Witcher: Versus is a Flash-based multiplayer fighting browser game, developed for CD Projekt RED by one2tribe and launched in 2008. The game has you create a character from one of three classes and challenge other players to deadly battles. When you first sign up for Versus, which is tied into your thewitcher.com forum account if you have one, you choose from one of three character classes: Witcher, Sorceress and Frightener.

The Witcher: Scars of Betrayal is a canceled add-on for The Witcher. It was in development by Ossian Studios for some time in 2008 but was cancelled.

The Witcher: Outcast was a planned add-on for The Witcher that was in development by roXidy Games but was cancelled.

Ryszard Chojnowski, who worked at CD Projekt RED as a project lead, started a series of videos about history of creating the original Witcher game, including early prototypes.

1996 - 1997 developer Adrian Chmielarz ("The Vanishing of Ethan Carter", "People Can Fly") and his studio "Metropolis" (bought by CD Projekt in 2008) was responsible for a first Witcher game, which also had the title "The Witcher". The early prototype of the game is now lost and only a few screenshots remain of this early attempt of a videogame adaptation. The project finally died and the title then was acquired in 2002 by CDPR. Please, read more: Eurogamer, 2015, by Robert Purchese