The old manor was built long ago on a small island off the swamp cemetery and served as the seat of Temeria's rulers until Princess Adda, the daughter of King Foltest and his sister, died at birth only to return as a bloodthirsty striga. The king did not want to kill his own offspring, so he and his court moved to the newly built castle at the other end of town. The princess was later freed from the curse, but the manor remained vacant and deteriorated over time. 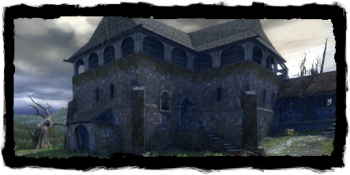 The Old Manor house is not actually accessible during the game. Geralt only ever goes into the catacombs beneath it in his quest to hunt down and kill Azar Javed. The manse is situated on the highest point of the small island which has appropriated its name. It is surrounded by a once formidable, but now decaying palisade which overlooks the ruins of a village.

The views from the once grand estate must have been spectacular.