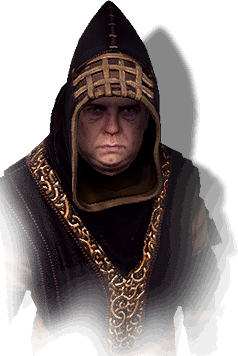 Olcan (aka The Poisoning Priest) is a secondary character in The Witcher 2: Assassins of Kings. He appears to serve the deities Kreve, Freya and Melitele.

In the preamble to Chapter II, a fight emerges between Kaedwenis and Aedirnians during war negotiations. Olcan's attempt the stop bloodshed is met with death at the hands of King Henselt who, blinded by rage, brutally slams the priest against a large stone obelisk, killing him instantly. His death sparks a series of strange happenings, including an eclipse, unleashing the full power of Sabrina's curse.

On Iorveth's path, investigations by Geralt reveal that he played a key role in Saskia's poisoning.

Olcan, the priest from Prince Stennis' retinue, turned out to be directly responsible for the poisoning of Saskia. The clergyman apparently thought that a heavy dose of thaumador would be more effective than prayer or excommunication. Unfortunately, because he was already dead, he could not answer for his deed.

An early script of The Witcher 2: Assassins of Kings contains information indicating that he is hierarch of Vengerberg who, upon taking that mantle, adopted the name of Blessed Olcan. This could be a reference to Saint Olcán, a 5th-century Irish saint.