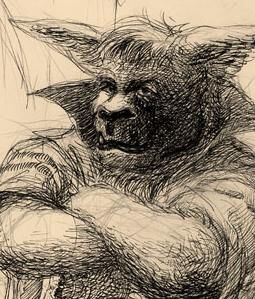 Nivellen was a cursed man who lived in Redania, in the woods near Murivel, in a secluded manor. He was called "Fanger" or "Degen" by the locals and stories of his "monstrous" nature were used to scare children. The tale of Nivellen appears in "A Grain of Truth", a short story included in The Last Wish collection. After a long conversation, Geralt decides that Nivellen cannot be a monster because he is able to touch the witcher's medallion without ill effects.

When he was a boy, Nivellen was quite sickly. His father and grandfather before him had made a fortune by leading a gang of highwaymen and cutthroats. After his father was killed in an unfortunate encounter with a two-handed sword, Nivellen inherited command of the gang. Initially the enthusiasm and naïveté of youth banished any feelings of remorse and he participated willingly in the gang's misdeeds.

One day the gang robbed a temple in Gelibol and coerced Nivellen into raping the young priestess there. Before killing herself, she spat in his face and cursed him, telling him that he was a "monster in a man's skin" and that he would become a "monster in a monster's skin". She also mentioned a way to lift the curse, but Nivellen didn't quite understand that part; he tells Geralt that he only recalls her saying something about the blood of a loved one. Unbeknownst to Nivellen and the gang, the woman was a priestess of Coram Agh Tera, the Lionhead Spider cult and her curse was not an idle one.

A couple of days later, Nivellen's form changed, though his mind and personality remained untouched. The household staff fled while Nivellen raged, confused and in a panic. The manor itself reflected his mood, with doors banging shut and furniture flying about everywhere. Quite a few people died as a result and even his cat, Glutton ran away in fear.

Nivellen stayed in the manor, alone, for a long time, until one day he spied a man in the courtyard stealing a rose from a rosebush that Nivellen's aunt had cherished. Recalling his childhood bedtime stories and desperate for a cure to his lonely state, Nivellen demanded the man to give up his daughter to him for the period of one year. This led, ultimately, to a string of young women coming to live with Nivellen for a year each, and leaving at the end of the year with gold and gemstones. Until one day, one of them decided to stay...