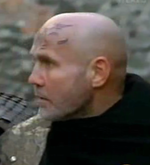 Władysław Barański as Nimir in The Hexer

Nimir, along with his twin-brother Vyr, is a member of Renfri's band. 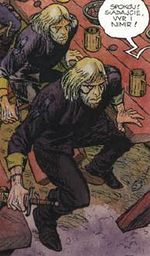 Nimir and Vyr in the graphic novels

Nimir and his brother also appear in the graphic novel "Mniejsze zło" (The Lesser Evil).

Played by Władysław Barański in The Hexer. In the series, the twins were both bald, instead of having the hair described in the short story The Lesser Evil.