A Nidhogg (Níðhöggr, i.e. Malice Striker) is a creature from Norse mythology, a dragon who gnaws at a root of the world tree.

It first appeared in The Witcher: Adventure Game as an horrific opponent. 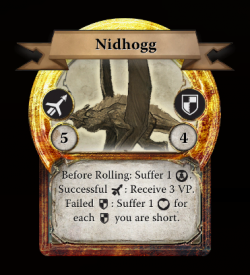 A Nidhogg can cross your path in "The Witcher Adventure Game". This creature is very hard to defeat and one of the strongest opponents in the game (level: Gold).

To defeat it you need: