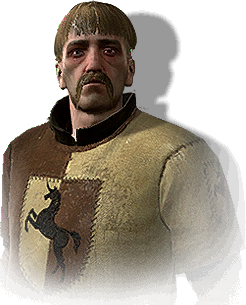 Mavrick is a secondary character in The Witcher 2: Assassins of Kings. Geralt first meets him in the western part of the lower Kaedweni camp, being ridiculed by his fellow soldiers.

One does not need to move in high society for a public defecation to end his social career. Exactly such an event made a Kaedweni soldier, Mavrick, the laughing-stock of the entire camp. Yet it turned out that neither rations nor dysentery had caused him to fill his pants.

In truth, his reputation – and not just that – had been soiled by the events of one ghastly night when Mavrick had encountered a terrifying specter.

According to the ghost, Mavrick's conscience was as stained as his undergarments.

Mavrick's death was the fault of the witcher, who assumed one time too many that a damned spirit tells the truth.

Yet Geralt believed his words. Mavrick knew that there was only one way to remove the brown blemish from his honor. He battled not only the monsters, but also his own fear. After the fight ended, he told Geralt of the dark events of years past which had led to this story.