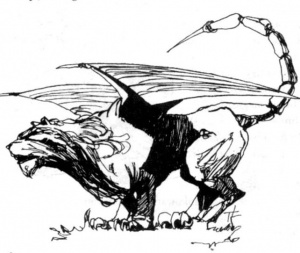 Manticore is a giant beast with the body of a lion, bat wings and scorpion tail. As a young witcher, Geralt fought a manticore. He also killed one during the Nilfgaard War, near the town of Dorian.

They are said to somehow use the poison of the Bohun Upas.

In The Witcher 2, Geralt recalls that he fought an imperial manticore in one of his flashbacks, while pursuing the Wild Hunt.

Siegfried relates the story of how his father, Eyck of Denesle, died fighting a manticore when he first meets Geralt in the sewers.