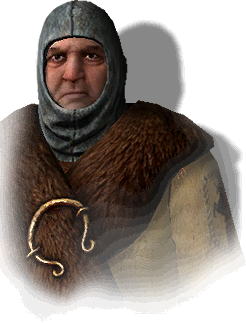 Manfred is a secondary character in The Witcher 2: Assassins of Kings, and Sven's father.

A father's care for his son, even an adult son, can cause even the bravest to grieve and worry. Manfred was an old soldier, a Kaedweni veteran of many battles who had lived a full life. Yet the thought of outliving his son, who was to face the terrifying Butcher of Cidaris in the arena, had broken the brave man. Manfred tried to drown his sadness and despair in booze in the camp canteen.

If Sven survives in the arena during the quest The Butcher of Cidaris:

After his son emerged from the arean victorious, Manfred rewarded Geralt. He was extremely helpful to the witcher, proving himself a man of honor.

If Sven dies in the arena during the quest The Butcher of Cidaris or the quest fails:

His son's death was a terrible blow to Manfred. Though the witcher had failed to save Sven, the old warrior behaved honorably and helped him as best he could.