Mamunes are small creatures said to prevent folk from finding their way home after a night out at the inn. They are said to gather on the eve of Saovine. They are mentioned, along with misguids, by the villagers of Upper Posada in the short story "The Edge of the World".

Andrzej Sapkowski's mamunes described in the Hussite Trilogy are proper humanoid race. They are midgets with long egg-shaped heads, bristled stiff hair, hooked noses, bulging eyes streaked with little red veins and colossal ears. They possess an advanced ability of ventriloquism, making they voices so they appear coming from any place in the area. They used to bring it into play foxing the wayfarers in the swamps for fun until the slapsticks bored them.

One of the best known mamunes is reddish haired Jon Malevolt, an anarchist, Hussite sympathizer and magic practitioner. 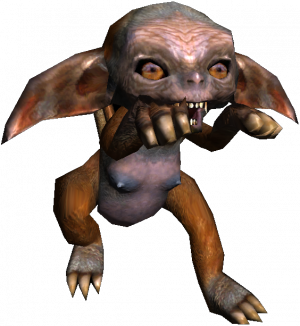 These little creatures are seen throughout The Witcher, but they serve no obvious purpose. They tend to gravitate to Geralt and dance around him but otherwise do not interact.