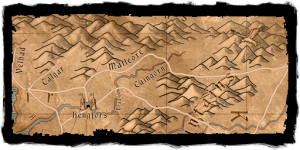 Malleore is a northern region formerly part of the East March of Kovir, now part of the Hengfors League. It is located in the foothills of the Dragon Mountains, bordered to the west by the mountainous region of Talgar, and to the east by the river Braa. The capital city is Malleore.

The coat of arms for Malleore is never actually described in the books. This particular coat of arms was designed by our resident heraldry and Witcher expert Mboro.

This version of COA has been also used in Reasons of State graphic novel.

The flag for Malleore is never actually described in the books. This particular flag was designed basing on the work of our resident heraldry and Witcher expert Mboro.