Mahakam is an autonomous region and a mountain range between the kingdoms of Temeria, Aedirn, Lyria and Sodden, inhabited by dwarves, gnomes, halflings and bobolaks.

It is the biggest known exporter of iron and steel to the Northern Kingdoms and Nilfgaard and many mines, foundries, forges etc. are located there. Mahakam iron is famous for its quality and is considered to be the best in the world. Aside from its iron, Mahakam is famous for its weapons, forged using advanced gnomish technology.

Formally, Mahakam is a fiefdom of Foltest, king of Temeria, but the Mahakam dwarves and gnomes maintain much independence, as any intervention would result in dwarves stopping the supply shipments and flooding the mines. The real authority in Mahakam is dwarven elder Brouver Hoog, who resides at Mount Carbon. 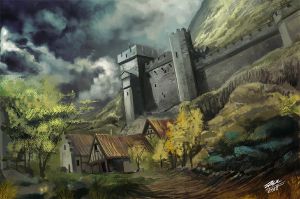 Kurcova village in Mahakam - concept art for The Witcher: Scars of Betrayal