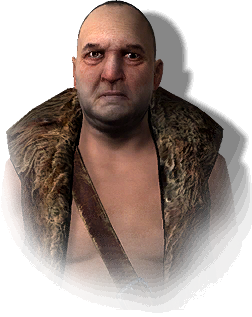 Magnus is a secondary character in Chapter II of The Witcher 2: Assassins of Kings. He is the blacksmith at the Kaedweni camp and an avid arm wrestler.

Every military camp has uses for a blacksmith – from shoeing horses, to making and repairing weapons, to freeing the wounded from warped armor after a battle. Magnus was a reliable artisan, a huge man with the strength of a bull. Rumor had it that his grip was not unlike that of iron pincers.