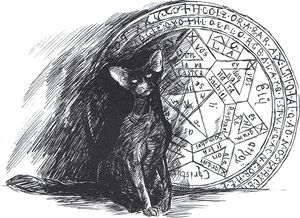 Cats are creatures with a remarkable connection to magic

Magic plays a large and central role in the witcher universe. It is used not only by witchers, but by the many mages, priests, druids and myriad other magical creatures that inhabit the literature.

In The Witcher, the most prominent use of magic is the Signs used by Geralt and other witchers, but it is also used by mages, like Azar Javed and, notably, Triss Merigold, a sorceress. There are also items and places imbued with magical qualities.

These items may or may not be truly magical:

The book "The Art of Magic" provides a journal entry about magic.

The Power the sorcerers can command is commonly called magic. In the opinion of a certain sorceress I'm acquainted with, magic is chaos, an art and a science, a curse, a blessing and progress. However poetic it may sound, it is hard to find a better simile. Everything depends on the person that uses that Power, of course. Still, it is a fact that it can be used to achieve things not possible to normal humans. The witchers' Signs are also a form of magic, but sorcerers look at them with disdain, since they cannot be compared to the forces the sorcerers themselves command. Without magic our world would certainly be less interesting, and many beautiful things would be forgotten.