The Mage's notes can be found in the expansive cave system of the Unseen Elder's lair during What Lies Unseen. There are several of these to be found. The first entry is found near a strange skull and some ancient coins where Geralt first finds footprints.

The teleportation worked: I managed to get into the caves with most of my equipment. Most importantly – the megascope is in perfect condition, so I should be able to communicate with Ban Ard, I just have to set it up in the right place.

I have already observed numerous gravitational anomalies, which suggests that Sorel Degerlund was right – the boundary between spheres really is very thin here. More tests should allow me to determine whether a passage to our world has really opened up.

- One hour after arrival -

I haven't met any vampire's yet, but I can hear their voices. I'm going to explore. I'll have to be careful.

This second entry is found near the broken megascope.

Starting the megascope didn't work. I'm probably too far underground to make contact with Ban Ard. Thus, I have to try to communicate with Vampires Superiores without further consultation. I better work fast.

Found along with the diagram for the Feline crossbow in the wreck of the Flying Stag.

Kiyan has enlisted with the Flying Stag as a guard of sorts. A hefty sack of Novigrad crowns convinced the captain to lodge me in his cabin. All is going according to plan.

I'm actually finding this expedition amusing. I'm glad I didn't contract the kidnapping out to some bulgy armed halfwit. I'll do it more gracefully myself.

He's cautious. I won't be able to put him down with a casually placed poison apple. Guess I'll have to zonk him out with a spell and whisk him away via teleport. I just hope it won't plop us down somewhere in the middle of Temple Isle instead of in my quarters below it. The power pulsating from my laboratory tends to throw off a good portion of my attempts to teleport home.

Very high level of resistance to psionic spells. Time needed for full penetration of his nervous system – a half an hour at least.

A few more moments and the witcher will be ready for transport. Now I just need to wipe our tracks. Perhaps a little change in the weather?

While waiting for more favorable atmospheric conditions, I looked through his things. Some very intriguing documents. A map of Est Tayiar, crafting diagrams of elven provenance (margin note: highly interesting sketch for a one-handed crossbow, most likely used to hunt draconids or ornithosaurs, must ask about this during interrogation. Confirms my theory that the witchers of the Cat School use elven weapons.) and, wait for it.... Professor Sigismund Gloger's notes. It's clear the witcher had something to do with the famous professor's disappearance.

Think I might have overone it a bit with those cumulonimbi... No point in tarrying, time to evacuate. 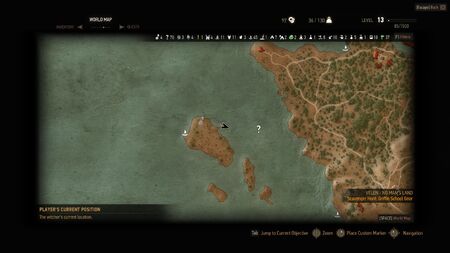 Location of the wreck of the Flying Stag
Retrieved from "https://witcher.gamepedia.com/Mage%27s_notes?oldid=395818"
Categories: