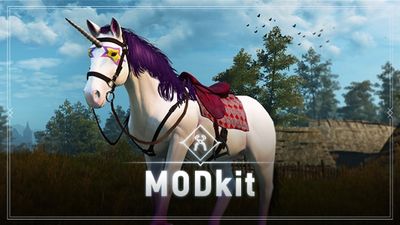 The MODkit for The Witcher 3: Wild Hunt contains a set of tools that enable modification of the game. It was officially released by CD Projekt RED on August 14, 2015 [1]. You can download it from Nexus Mods.

Released today, the Modkit enables Witcher community to modify several aspects of the game to their own liking. Thanks to texture import and export, gamers can now modify the looks and feel of in-game objects, while the possibility of substituting meshes allows to insert new models in the game world in place of existing ones. Finally, access to script files opens up an entirely new array or modification options to many in-game aspects, so modders can fire up their imagination and fiddle with item statistics and much more. In order to download the Modkit, head on over to nexusmods.com, the official home of The Witcher 3: Wild Hunt mods where you can download the extractor itself as well as some of the exisiting mods. Don’t forget to check our forums for the Modkit documentation. We simply cannot wait to see all the fantastic creations from the modding community. Should you have any additional questions regarding the capabilities of the kit, make sure to check out GameSpot’s Q&A.

We're massive fans of CD Projekt Red here at the Nexus. Not only do they make awesome games like The Witcher 3, but they've consistently shown themselves to be champions of PC gaming above and beyond any other major game developers or publishers out there. And most importantly, they show this in their actions, not hollow words and unfulfilled promises. DRM free games, huge free "Enhanced Edition" patches to their games, free DLC (let's acknowledge how awesome that is in this day and age of "season passes" for DLC...), modding tools, and the list goes on.

So it was a real honour when a few weeks ago the folks over at CDProjekt Red got into contact with me about the (then) upcoming release of The Witcher 3 modding tools. They very kindly gave us a heads up about their plans and gave us access to a beta version of the tools so that we could update our Nexus Mod Manager to support mods made using the tools in time for their launch.

That launch is today and CDProjekt Red have annonced the launch of their modding tools. We have updated NMM to version 0.56 which includes the Witcher 3 modding support as well as fixes and optimisations for Windows 10 users of NMM. You'll need to update NMM to make use of this new functionality.

You can download the modding tools directly from our servers (no need to login to the sites to download) which also contains an official quick start guide and a sample mod creation walkthrough from CDProjekt RED.

Please get in contact with us if you run in to any problems with getting Witcher 3 mods made with the ModKit to work with NMM and we'll get a hotfix out ASAP!

We look forward to seeing some great new mods for The Witcher 3 using the official ModKit.