Love's Cruel Snares is one of the quests in The Witcher 3: Wild Hunt. In this quest, Geralt comes upon a sad young woman in a shipwright's camp on the west coast of Velen, north of Condyle. She asks him to find her fiancé who has disappeared.

While wandering Velen Geralt happened across a woman who was weeping violently. She explained that her betrothed had gone into the woods to check his traps but never returned - and she feared the worst. Geralt calmed her and promised to check what had become of her beloved.

When Geralt returned from the woods, he did not bring good news with him. The woman saw this in his face at once. Though her hands trembled and her eyes welled with bitter tears, she did not forget to pay the witcher what he was owed and thank him with some kind words. 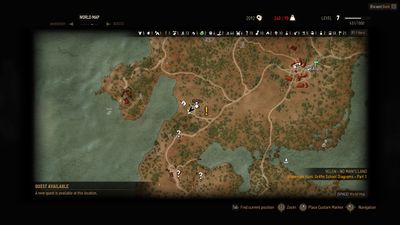