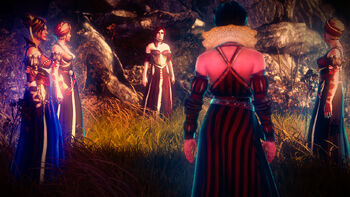 Some of the sorceresses of the Lodge in The Witcher 2

The Lodge of Sorceresses arose from the ruins of the Brotherhood of Sorcerers after the incident on Thanedd Island essentially killed the older order amongst mages. It was a secret organization comprised entirely of female mages and even referred to as a sisterhood. Started by Philippa Eilhart about six weeks after the coup, the first meeting was attended by Philippa, Triss Merigold, Keira Metz, Margarita Laux-Antille, Sabrina Glevissig, Sheala de Tancarville, Francesca Findabair and Assire var Anahid, though only some of the sorceresses where physically able to join the proceedings. For the second meeting, all the members did attend physically.

The Lodge's meetings took place in the castle of Montecalvo, Philippa's home base.

In Baptism of Fire the Lodge plans to have Ciri wed Tankred Thyssen of Kovir in order to create a country ruled by magic. The Lodge then plans to use this country to create an empire that rivals Nilfgaard.

In the original game, the Lodge and its members are only mentioned. The Lodge itself plays no active role.

In The Witcher 2: Assassins of Kings, the Lodge of Sorceresses has an important influence on the narrative.

Spoiler warning: Significant plot details follow.
As in the novels they seek to create a country ruled by magic. So some members of the Lodge hire Letho to murder King Demavend and support a peasant revolt lead by Saskia in order to turn the Pontar Valley into a separate country under their control.

Depending on the player's choices, some of the sorceresses may find their deaths. Among these are Assire var Anahid killed by Shilard, and Síle de Tansarville by Letho if you have no intention to save her. Furthermore, Sabrina Glevissig had previously been executed by King Henselt three years earlier. Philippa Eilhart is imprisoned and blinded by King Radovid, who charges her with treason. Yennefer of Vengerberg has lost her memory and is in Nilfgaard. The entire lodge is thus dismantled, but it is not know yet what will be the fate of sorceresses still alive, such as Triss Merigold, Fringilla Vigo and Francesca Findabair.