Little Sisters is a quest in The Witcher 2: Assassins of Kings.

This quest is available only if you side with Vernon Roche in Chapter I.

Upon entering the upper Kaedweni camp, Geralt sees Mavrick, one of the soldiers near the western exit, being harassed by other soldiers. He talks to the soldier, who tells him that he is being haunted by a ghost. He tells a tale of falling asleep by the riverside and being woken by the specter about an hour before midnight and being so frightened that he shat himself and was forced to return to camp with a "pantload". This is the source of his unfortunate nickname "the Crapper" and the reason why he is ridiculed constantly.

When Geralt asks him for more information, he tells the witcher to talk to one of the prostitutes by the whores' tent in the camp followers' encampment. 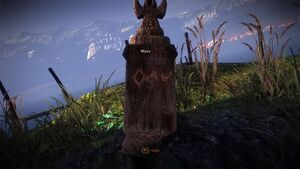 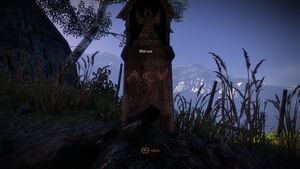 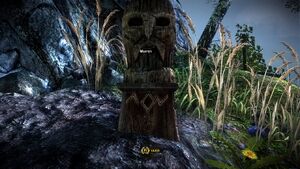 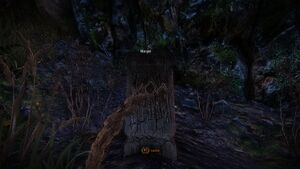 After talking to the prostitute, Geralt makes his way to the hut on the cliff, which is located south west of the camp followers' encampment, in a small ravine. Behind the hut (again, southwest), there is an alcove to containing four graves, one for Moira, Marissa, Murron and Malget. Geralt examines each of the graves closely and takes note of the symbols on Malget's grave marker.

He then returns to the hut and notices a pile of barrels covering up a trap door. He uses his Aard sign to remove the obstacle and descends to the cellar under the hut. There he finds three strange altars with a symbol carved on the front and a candle on top of each one. He decides to light the candles and see what happens. At first he tries randomly lighting the candles but this only seems to cause wraiths to spawn, though they are easily defeated.

The witcher then notices that the symbols on the altars match the symbols on the graves, so he decides to try the sequence on Malget's own grave — lighting the west candle first as it is marked with the "V", then the east candle as it has the diamond shaped rune, and then the north candle which is marked with the "Λ". This causes a previously hidden door to open in the wall revealing a small chamber. Inside, Geralt finds a table with Malget's notes, but he can make no sense of them and decides he must find a wizard to translate (part of the quest "From a Bygone Era").

The witcher then decides to go to the beach and wait until 11pm (the time at which the specter appeared to Mavrick the first time). At the appointed hour, three specters appears, wraiths in fact. The leader tells Geralt that Mavrick was the one who killed her and her sisters, and that she is haunting him to get revenge. The witcher must then decide whether he believes her, or if he should talk to Mavrick again to confirm the story. He can choose to just kill her then and there, in which case he can return to the camp to tell Mavrick that the specters are dead earning the soldier's thanks. In that case, the quest ends with a 50 XP reward. 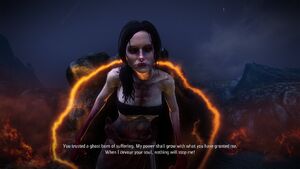 If Geralt decides to confirm the facts with Mavrick, he goes back to the camp and talks to the soldier again. Then, he listens to Mavrick's side of things (which is still a bit vague on details) and after, tells the soldier to meet him back at the beach one hour before midnight to sort things out. He then makes his way back to the beach where Mavrick is waiting near the hut. The two of them then walk down to the shore to meet the bruxa together.

If Geralt accuses Mavrick of murder, the soldier gets angry and runs off. A trip back to the beach reveals that the specters have killed Mavrick. The wraith then laughs at the witcher for being easily fooled, pointing out that even she was worried he would not believe her story as it did not match the facts — specifically, she spoke of her two sisters, when in fact Mavrick only had two sisters and one brother. She then disappears, summoning a "demon" (bullvore) and the quest fails (the bullvore drops sword schematics for a Mahakaman sihil).

The wraith once again tries to sow the seeds of doubt and Geralt must decide once and for all whether or not he believes Mavrick. If he decides at that point that Mavrick was lying (because he cannot adequately defend his actions), the witcher can leave him to be killed by the specters and the same scenario as before plays out with Mavrick being killed and the bruxa laughing at Geralt.

If Geralt sides with Mavrick and accuses the specter of lying, she summons her two "Little Sisters" and they attack the men. Luckily, they are easily dispatched (no special drop but a nice 300 XP reward).

Once the specters are dispatched, Mavrick finally tells Geralt the whole story: Mavrick was lead scout for Vandergrift and used his family home as a base. His sisters were "dishonoured" by the soldiers stationed there, driving Malget to kill his own children (though he claims innocence, and it his hinted that he may have been possessed by an evil spirit of his own summoning). Returning home, Mavrick found his father digging graves for his siblings in bloody clothes. The two fought and during the struggle, Malget fell to his death from the cliff behind the hut. Mavrick buried him, and has carried the guilt ever since. He speculates that the spirits of his sisters haunted him as a punishment for patricide, while the codex entry suggests they wanted all of the siblings united in the afterlife.

Geralt was walking through the camp and witnessed an unpleasant incident. One of the soldiers was unceremoniously barked at, beaten and heard derision and sneering instead of farewells. It did not look like a regular drinking brawl. The witcher always had a nose for finding jobs and sniffed a mystery hiding behind that row. He approached the soldier to learn what was that all about.

The ill-treated soldier's name was Mavrick. He was a veteran of the battle that had taken place three years before, yet he was not respected because he had shat himself after encountering a specter on a riverside beach one night. That event destroyed Mavrick's life - no wonder then that he hired the witcher to rid him of his nightmare. Hoping to encounter the phantom himself, Geralt decided to go to the beach at night. The trails also led to a lonely house on the cliff. The witcher knew that there's always a story connected with the appearance of a wraith, so he decided to ask Liva, a medic making a living from healing camp followers. Three years earlier the girl had helped to dress the wounds of the battle casualties - she was sure to provide a wealth of information.

Geralt was interested in the house on the cliff and asked among the camp followers. One of them, Liva, claimed that the estate had once been the abode of Malget, a folk healer. Five years ago, while the quack was tending to those wounded in the battle, someone murdered his children. In despair, Malget threw himself from the cliff.

Geralt explored the hut on the cliff and concluded that no one had lived in the ruined building for a long time. However, he knew from experience that abandoned buildings with a past tend to hide dreadful secrets. He decided to take a good look at the hut's surroundings.

While searching the hut and its surroundings, the witcher found the entrance to a cellar. Inside, the signs were unmistakable - magic rituals had been performed there. Our hero carefully examined the furnishings, hoping to learn more about the hut's past.

When Geralt lighted the ritual totems in the wrong order, a guardian ghost appeared. The witcher was more careful in his next attempt…

When Geralt lighted the ritual totems in the proper order, the released magic opened the entrance to a secret room. The witcher started to search it.

Geralt found some old papers in the cellar of the house on the cliff. An old rule says that one should not disregard documents found in a haunted house, but these papers did not concern Mavrick's case directly. Therefore the Witcher hid them for later and returned to helping Mavrick.

There were three tombstones on the cemetery, with the following names inscribed: Moira, Marisa and Murron. Geralt also found the final resting place of the quack himself. It seemed suspicious that someone would fish out a suicide's body and bury it properly. Geralt even considered the croaker might have not killed himself at all. The name Murron - without doubt a male name! - was another mystery.

The specters claimed that Mavrick was responsible for the damned existence. He had murdered the three sisters and now they, as wraiths, craved revenge. The story seemed unclear and full of half-truths, so Geralt did not act hastily. He was unsure whether to trust Mavrick or the restless souls.

Geralt pressed Mavrick for information and learned that Malget was rumored to have colluded with demons. This meant that the mysterious specters could have influenced Mavrick when he was stationed in Malget's house and now wanted something from the soldier.

Geralt agreed to meet Mavrick at the beach, an hour before midnight. He wanted to solve the mystery and hoped that after that night he would be able to decide who was right.

The specters tried to trick Geralt, yet the witcher knew how to separate the wheat from the chaff. He realised that Mavrick was innocent. Now he had to send the evil spirit to the beyond.

The specters were defeated and Mavrick's contribution to the victory has to be mentioned, as he fought like a lion at the witcher's side. Geralt completed the task, and solved Malget's secret on top of that. The healer had killed his own children during the war. Only his son had survived - Mavrick, who had murdered his father in revenge for the slayings. His siblings' phantoms had haunted Mavrick because they wanted him to join them in the beyond. Siblings should not be separated? Bah.

Geralt carefully watched the events and decided that Mavrick was guilty. He handed him over to the vengeful specters. He knew that once they were sated they would pass into the beyond and stop tormenting the living.

Geralt turned out to be a fool. The apparitions tricked him into letting an innocent man die.

Geralt proved to be naive after all. He allowed an evil spirit to grow in strength, caused the death of an innocent man, and barely escaped with his life.