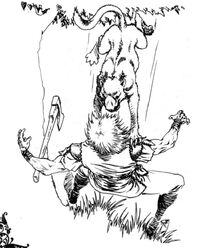 A leshy (Polish: Leszy, in English sometimes spelled Leshii or Leszi), also known as spriggan or leshen in The Witcher game series, is a forest monster that is described as something that "lives only to kill". When they kill something or someone, they do not leave much for any carrion eaters.

The leshy isn't described in any more detail in any of Andrzej Sapkowski's books, except The Tower of the Swallow.

In the Wiedźmin: Gra Wyobraźni PnP RPG, leshy is described as a forest-dwelling, iron-resistant, highly intelligent monster. For unknown reasons, many peasants consider him to be a spirit that protects the forest. In reality, it is a very dangerous creature that hunts woodland creatures and lone wanderers. It has the ability to polymorph. In its natural form, it is a wildcat-sized creature that looks like a cross between a wildcat and a bear, with mighty fangs and sharp claws. It mostly lurks among the tree branches, from which it quickly jumps on its victims. It usually devours the whole prey. Its mightiest weapon is the ability to shift shape. It can morph into a humanoid being that looks like a harmless, old man or into a tree branch that is practically identical to real ones.

Leshens in The Witcher 3 are ancient and powerful forest spirits. Possessing a deer skull as a head and tree-like limbs, a leshen can call for aid from crows or a pack of wolves.[1] Furthermore, in some circumstances, a leshen can only be "permanently" defeated if the person it chooses as its “link”, or familiar, is banished or killed as well. Geralt may also have to destroy a leshen's warding totems to rid a forest of its presence.[1]

Information from the official The Witcher 3 site[edit | edit source]

We never hunt in these woods. Never. Even if it means the whole village starves.
— Mulliver, ealdorman of Hoshberg in lower Aedirn

Leshens dwell in dense, primeval woods. Fiercely territorial creatures, they hunt with stealth and cunning as their only companions. They use their inborn magic to control the plants and animals within their territory — and so when stalking them, half the battle is merely getting near enough to strike. Leshens old [sic] enough to earn the appellation "ancient" wield advanced skills and tactics that make them particularly dangerous.

Leshen can cross your path in The Witcher Adventure Game. This creature is very hard to defeat (level: Gold).

To defeat them you need: