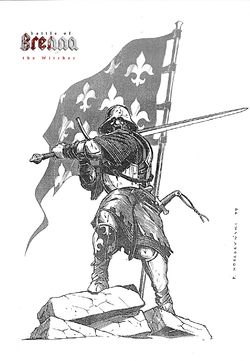 Landsknechts are troops equipped with halberds, pikes, crossbows and two-handed swords. They likely can be found in several Northern and Imperial armies.

Jarre met two Temerian landsknechts on his way to Vizima during the second Northern War.

There is a description of elite Temerian landsknecht regiments:

They are elite infantry units from Temeria, famous across the Continent. In contrast to other countries, where only the commoners serve in the infantry, in the ranks of these regiments a number of noblemen can be found. They are organized in regiments under the command of captains appointed by the King.

Landsknechts fight in the serried squares. Mantaining the rigid discipline is required. Each soldier is obliged to kill his comrade-in-arms if he see him breaking out of formation. The Temerians move as one body striking by hundreds, or sometimes even by thousands, at once. The first ranks attack with 16-foot-long pikes. They are followed by the halberdiers, while the center of a square (where the commander and the banner are) is secured by warriors equipped with two-handed swords. The crossbowmen protect the sides of the formation.

Landsknechts rarely use armours. Usually only the soldiers in the front row wear breastplates and helmets.

The strong style, one of the witcher fighting styles, is said to be devised by Temerian landsknechts.