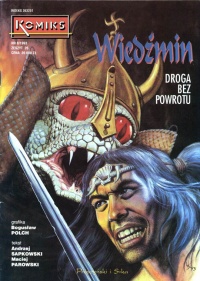 Korin on the cover of the Droga bez powrotu graphic novel

Korin was a warrior who helped the sorceress Visenna defeat Fregenal's Koshchey and is presumably Geralt of Rivia's father.

Korin appears in the "Droga, z której się nie wraca" short story and the "Droga bez powrotu" graphic novel based on it (also in a flashback in the comic "Zdrada".

Geralt's father appear in the first episode of The Hexer TV series, though his name is not mentioned.