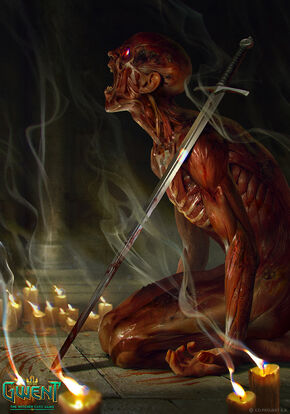 Kiyan was a witcher of the Cat School who was originally hired by Prince Adrien to retrieve a diagram for a silver witcher's sword and make sure that the members of the expedition sent to find it in Est Tayiar never made it back. A commission he carried out.

Later he took a job guarding the vessel "Flying Stag" which ferried women, possibly slaves, to Novigrad. On that trip, a Nilfgaardian mage named Irenues var Steingard bribed his way into Kiyan's quarters where he spied on him. Having decided the witcher would be the ideal subject for his research, the mage then summoned a storm which cause the ship to founder on the rocks off the coast of the Grassy Knoll and kidnapped the witcher, teleporting himself and his captive to his laboratory beneath Temple Isle.

At his laboratory, he cruelly tortured Kiyan for at least a month, eventually driving him to madness.