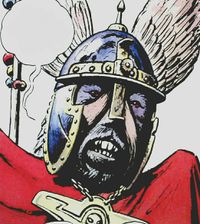 Bobołak Kehl in the graphic novel, illustrated by Bogusław Polch

Kehl was a bobołak, and a member of the band of mercenaries known as "Koshchey's Men", in the short story "Droga, z której się nie wraca" ("A Road with No Return") and the graphic novel based on that story, Droga bez powrotu.

He opposed Fregenal and helped Visenna and Korin kill the koshchey the former druid had summoned. However, he perished due to injuries he sustained during the battle.