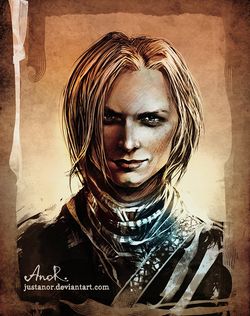 Kayleigh was one of the members of the Rats. He was thin, with long blonde hair reaching to his shoulders. He was the adopted son of the castellan in Ebbing. His face was angular, his eyes a mad green, and his mouth was usually twisted into a nasty grimace. He wore earrings and had a snake tattoo. He dressed in a black calf skin with silver accents.

Prior to joining the rats, his adoptive family was massacred by Nilfgaardian troops, one of whom was Reef, but Reef had, like Kayleigh been left for dead after the massacre. The two helped each other recover from their injuries and then set out to spread some mayhem of their own.

Ciri first met him at the inn in Glyswen where both she and he had been dragged against their will by two different gangs: Ciri by the Trappers, and Kayleigh by the Nissirs. He, and the entire gang with the exception of Ciri, was killed by Leo Bonhart and his men in Jealousy.