Istredd was a well-respected sorcerer in the city of Aedd Gynvael with a keen interest in archaeology. As a young apprentice, he studied under Roedskilde. Yennefer worked with him then and again.

He was one of Yennefer's long-time lovers. He challenged Geralt to a duel for the right to exclusive access to Yennefer's affections.

Istredd proposed to Yennefer while she was with Geralt in Aedd Gynvael. He promised her stability, a home, a future, and the child(ren) she's longed for. However, Yennefer left the city even before Geralt, and Istredd ended up helping Geralt when he faced Dermot Marranga and his men.

In the Netflix series[edit | edit source] 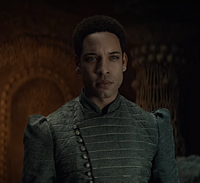 In the Netflix-Adaptation the sorcerer is portrayed by Royce Pierreson, and is said to be a graduate of Ban Ard. Istredd appeared in three episodes of the first season so far:

In the show he is the first one who is aware of Yennefer's powers when the then disfigured girl suddenly appears before him through a portal. Their love story is described a bit more elaborate than in the short stories. He misuses her trust when he reveals her elvish ancestry to Stregobor, who also has a much larger role than in the books.

Expansion required
This article is too short to provide more than rudimentary information about the subject. You can help Witcher Wiki by expanding it.
Retrieved from "https://witcher.gamepedia.com/Istredd?oldid=426383"
Categories: