From Witcher Wiki
(Redirected from Islander)
Jump to: navigation, search

Skellige, or the Skellige Islands, is an archipelago and one of the Northern Kingdoms. The group of six islands is situated in the North Sea, off the coast of Cintra, and southwest of Cidaris and Verden. "Skelligers" or "Islanders" are human inhabitants of the Skellige Isles. Despite living in close proximity to their mainland counterparts, they have developed an entirely different culture than people of Northern Realms.

In the short-stories and earlier novels, the culture of Skellige's people bears quite a resemblance to ancient Irish culture. Since The Tower of the Swallow, their culture has adopted more Scandinavian elements, reflected in Season of Storms, and the video games.

The coat of arms for the Skellige islands is never actually described in the books. This particular coat of arms was designed by our resident heraldry and Witcher expert Mboro. For a different take on the coat of arms, we have the Czech concept.

The flag for the Skellige islands is never actually described in the books. This particular flag was designed by our resident heraldry and Witcher expert Mboro. 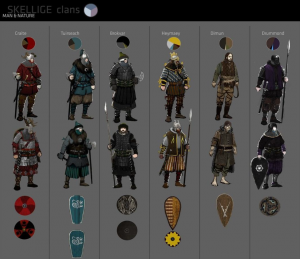 Skellige clans in The Witcher 3

The Skellige Isles constitute a major region in The Witcher 3.

The Skellige Archipelago is home to fierce warrior-sailors whom Continentals regards as pirates - and not without reason, for the Isles are barren and their inhabitants' livelihood comes mainly from plundering the seas. The land on these five large isles is divided between its clans, the heads of which are called jarls.