Iorweth (The Witcher 2 spelling: Iorveth) is an elf, a well-known hater of humans, responsible for burning many human villlages and civilian deaths, and was the commander of the last Scoia'tael commando to be broken during the second war with Nilfgaard. One of the elves under his command was Echel Traighlethan who was captured by the Redanian Secret Service and brought to Drakenborg to be hanged.

The character of Iorveth , despite being named from one character from the novels, is clearly modelled on another, Isengrim Faoiltiarna. He first appears in the cutscene on the beginning of the Chapter I of the game. It depicts what happened at about five months before the time of the game. He's approached by a mysterious individual claiming to be a friend of nonhumans with an offer: the man wants to kill kings for his own inscrutable reasons, and would like Iorveth's help in form of the elf's knowledge of secret trails and weapon stashes. To back his claim, this man shows Iorveth a head of Demawend, King of Aedirn and Sovereign of the Pontar valley.

At the beginning of Chapter I, Geralt, Triss and Vernon Roche meet Iorveth. Roche appears to know the elf and they are quite hostile to each other, hinting at less-then-pleasant past experiences. Shortly afterward, it becomes clear that Iorveth managed to rebuild the commando he lost during the war, as elves attack Geralt and company on his orders.

He is pushed by circumstances to the very edge of society, painfully aware that the Scoia'tael have been used in the war with Nilfgaard and have been ruthlessly sacrificed during peace negotiations. And he is determined not to let that happen again. He enjoys a fierce loyalty from his men. None of them would ever betray Iorveth and this speaks volumes in his favor. Indeed, he is a skilled commander and as cunning as a fox.

Considered a mass murderer and terrorist, even by Saskia, he has nonetheless come to understand that the ways of the Scoia'tael are doomed to fail, hence the reason he did not join Yaevinn and instead chose to fight side by side with humans and dwarves to secure the foundation of an independent state in Upper Aedirn. A state with egalitarian laws between elves, humans and dwarves. 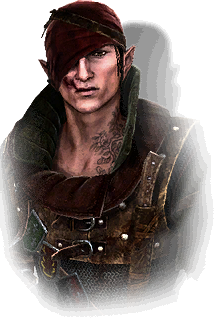 They say all elves are beautiful, that they are born thus. In Iorveth's case someone set out to change this, marking his face with an ugly scar that the elf partially hid beneath a crimson headscarf. Iorveth was a living legend, the elusive leader of a Scoia'tael unit whose members gave no thought to laying down their arms and continued their war against humans. Stories of his deeds, of his deep hatred of dh'oine, painted him as more akin to a vengeful ghost than to an individual made of blood, bone and flesh. Certain sources claimed that Iorveth was the kingslayer's ally and thus involved in recent events, yet Geralt's first meeting with the elf brought few answers and ended with Scoia'tael archers laying down a deadly barrage. Indeed, it seemed at the time that the elf would only ever answer the witcher with arrows.

In the eyes of some people, like Loredo or Roche, Iorveth was a common criminal, his hands stained by the blood of innocents. Indeed, the list of those he had cut down in his "fight for freedom" could easily rival the number of ballads, romances and ditties in my repertoire.

The elf was certainly a dangerous individual. He was not, however, a bloodthirsty monster. Ever cautious and aware of the game he was playing, he jumped at the chance of testing Letho's loyalty, becoming Geralt's ally, at least temporarily.

If Geralt does not give him his sword during Chapter I: The Assassins of Kings:

We can safely assume that Iorveth long remembered both the wallop Geralt gave him and the witcher's sudden turn, though the elf's pride probably hurt a lot more than his head.

If Geralt gives him his sword during Chapter I: The Assassins of Kings:

Fighting side by side certainly helps dispel distrust. The witcher kept his word, which Iorveth appreciated, and the path to further cooperation stood open.

The Scoia'tael leader had a vision, and his pursuit of it put him in an altogether different light. Grand as it was, the plan could either be considered incredibly ambitious or purely insane. Whatever the case, he needed allies, though if he found none he was more than prepared to forge ahead alone.

If Geralt chooses Roche's Path during the end of chapter I:

Yet Geralt ultimately decided not to work with the Scoia'tael leader, choosing Vernon Roche's help instead. Thus the paths of the witcher and Iorveth began to diverge.

If Geralt chooses Iorveth's Path during the end of chapter I:

Iorveth was loyal towards those who placed their trust in him, and he returned their trust. This was undeniable. His respect for Geralt grew after they freed the prisoners, and the elf would not hesitate to repay the debt he had incurred.

The relations between Vernon Roche and Iorveth were certainly complicated. The Scoia'tael openly hated the Blue Stripes' commander, and doubtless wanted his death. Yet one could see in him a shadow of respect for the Temerian's abilities and tenacity. The fact that the elf could give even a hated enemy his due was, I think, to his credit.

Iorveth had been living in hatred and shedding human blood for years, and the question of whether he still knew what he was fighting for remained an open one. Even those who had known him longer had their doubts.

When Iorveth chose to fight for a free Pontar Valley, when he swore an oath of allegiance to Saskia, he stood alongside the humans defending Vergen. Few trusted this sudden shift in this uncompromising enemy of the Dh'oine, an elf responsible for more than one razed village and the tears of more than one mother over a slain son. The Squirrel commander had Saskia's full confidence, however, and that put an end to all discussion.

(Unknown) Possibly if Geralt sides with Iorveth but did not give him his sword during Chapter I: "The Assassins of Kings":

Yet Iorveth put his resentment aside as he spotted the opportunities that an alliance with the witcher might afford. Though much time would pass before his mistrust dissipated completely, he and Geralt now shared a common goal.

Iorveth and Geralt's meeting near Vergen was less than cordial. The Scoia'tael commander did not conceal his resentment and would have given much for the chance to bury the witcher alive in an anthill. Geralt could only ascribe the elf's decision not to act on that desire to his loyalty to Saskia. For elves are not known for respecting the immunity of envoys, if not on a whim.

Iorveth might well have expected Geralt to turn up near Vergen, so he was not surprised to see the witcher. But he did seem disappointed that Geralt had chose other allies. Still, he gave safe passage, allowing the witcher to meet Saskia without further impediment.

If Geralt chooses to aid Iorveth during Chapter II: "The Siege of Vergen":

Though the fall of Vergen marked the ruination of the Scoia'tael commander's dreams, the fact that Geralt appeared during the battle must have been a pleasant surprise for him. Elves tend not to express their emotions effusively, but Iorveth's behavior indicated that the witcher's aid was not without meaning to him. However the two finally parted ways, and that short meeting was their last, at least where this story is concerned

Iorveth neither forgave nor forgot, thus he had trouble accepting the fact that Geralt assisted him in battle after what had happened in Flotsam. So the proud Scoia'tael clenched his teeth and quashed his anger, saving it for future battles. However the two finally parted ways, and that short meeting was their last, at least where this story is concerned.

When Iorveth disappeared after the poisoning of Saskia, nobody expected to see him again. Some whispered he had been behind the poisoning, or that he had simply lost the will to fight. Nobody believed his talk of elven archers. Time would show what his promises were worth.

The Scoia'tael doubtless had a sense of dramatic timing. His reinforcements could not have come at a more appropriate moment, and the emotion felt by all the defenders, including yours truly, was pure euphoria. Iorveth proved himself a person who does not waste words or abandon allies in need. If I had had any doubts about him, they dissipated together with the smoke which hung over Vergen.

Iorveth was determined to save Saskia and settle the score with the sorceresses. He and Geralt set out to Loc Muinne to close the final chapter of this story.

There they had to split up – Iorveth went to search Philippa's quarters and Gerald didn't hear from him for some time. It's a fair guess the Scoia'tael leader was not idle in the meantime.

If Geralt chooses to help to save Philippa in Chapter III:

Iorveth, as he was wont to do, appeared as if from nowhere – just in time to help escort the sorceress to her quarters. On the way he made it clear to her that, if not for the circumstances, their meeting would have been far less pleasant to her.

If Geralt chooses to help to save Saskia in Chapter III:

The elf helped Geralt recover the dagger needed to lift the spell from Saskia. Though Iorveth could only hope that Geralt would do his best to not kill the dragoness, the Scoia'tael took the risk and placed his trust in the witcher. They had already been comrades-in-arms for good or ill for some time.