Iola the first, or simply Iola, is a young, sensitive woman with reddish hair, freckles and blue eyes. She is a priestess in the Temple of Melitele in Ellander, and thus a protégé of Nenneke. As a sacrifice to the goddess, Iola has taken vows of silence, which remain unbroken.

She features in "The Voice of Reason", the framing story in The Last Wish collection. 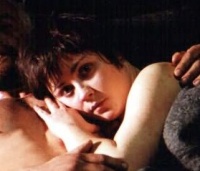 Like in the short story, Iola slept with Geralt while he was healing from grievous damage. In the TV-series, the healing aspects of said encounter were highlighted, and in the aftermath Iola foresaw destruction coming to the temple. This vision and its setting differ quite a lot from the scene that essentially ends "The Voice of Reason".

In the TV series, Iola broke her vows of silence; she foretold the deaths of Falwick, Renfri and the priestesses of Melitele in the temple, including her own.

Played by Maria Peszek in The Hexer TV series.