Ida Emean aep Sivney, an elven sorceress from the Blue Mountains and a member of the Lodge of Sorceresses. She is an Aen Saevherne, a sage. She doesn't wear precious metals or stones, preferring pearls, corals and ambers over them.

Reim, the elven scout mentions her, in a comment to Geralt about mages.

Ida Emean is mentioned by ambassador Shilard Fitz-Oesterlen, as one of the sorceresses accused to be a member af the conspiracy that facilitated the murders of King Demavend and Foltest. She is also sentenced to death, as well as the other members of the Lodge of Sorceresses.

Ida appears briefly in The Witcher 3. She converses with Yennefer and Geralt via megascope, providing them information when they seek an understanding of the ancient curse afflicting the creature Uma.

Ida is ceremonial and polite and expects others to be polite as is appropriate in a conversation with a sage. 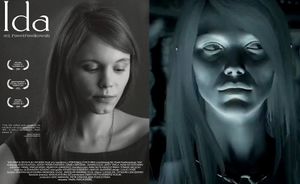 On the left - Agata Trzebuchowska in Ida movie; on the right - Ida Emean in the game