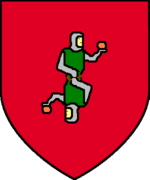 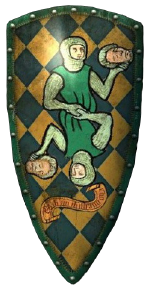 House of La Valette is a Temerian noble house ruling the Barony of La Valette which had ties to the royal dynasty. The head of the family is currently the baroness Mary Louisa La Valette and the heir apparent is Aryan La Valette.

The La Valettes are barons who held extensive lands in the north of the kingdom of Temeria, with their seat, a castle of the same name, lying on the river Pontar on the border with Redania.

The old baron La Valette married Mary Louise with whom he had a son, Aryan. The wife of Baron became the mistress of King Foltest a union which produced two bastard children, Anaïs and Bussy La Valette. Initially, Mary concealed the fact that the king was the father of the children, allowing them to pass as the children of the old baron. But when the truth about their true origin came to light, Foltest denied everything ridiculing his mistress and her family.

Young Aryan could not get over the disgrace, and his mother started to worry more and more about the fate of their children. They soon find themselves dissatisfied with the rule of Foltest's nobles and stirred up rebellion among the barons, hoping to weaken the crown and obtain new privileges. Maria declared the independence of La Valette lands from Temeria and placed her son in command of her subjects.

Foltest responded blow for blow and took up the challenge. The La Valette troops could not match the royal army who laid a month-long siege of La Valette Castle.

If Aryan is killed during the castle assault, then according to Morvran Voorhis the following events ensued: "After Aryan's demise, Louisa's nephew came to pay his respects. Got one glance of Molly, and - well, they wed soon after. They now await his inheritance. With the baroness' son dead, the estate will go to the nephew... and Lady l'Attard, known until recently simply as Molly". Unfortunately the name of the nephew, the La Valette's successor is not mentioned, only his surname - "La Attard".