High Stakes is one of the quests available in The Witcher 3: Wild Hunt. It involves a Gwent tournament held at the Passiflora and hosted by Count Tybalt. Other contestants include: Patrick Hazelnutt, Bramble Fruntenstroch, Tim Knott, Harald Featherbuns, Bernard Tulle, Finneas and Sasha.

Geralt is hardly an ace gambler. He has had a few good runs in dice poker tournaments, true, but these were local affairs against opponents whose skill level left much to be desired. A tournament in the world's greatest metropolis – now that was a horse of an entirely different color. The high entry fee and stringent deck requirements scared off amateurs, so only wealthy professionals had signed up. Everything was in place for play at a high level in exciting company – in other words, my friends, for pure pleasure.

Perhaps Geralt would even have been tempted by Sasha's proposition. Before he could accept it or reject it, however, another double dealer made his presence known. While they were talking one of the participants stole the coin set aside for the reward, beating Sasha to the punch.

It started with an indecent proposal. Sasha, one of the participants in the tournament, made Geralt a proposition so brazen even his jaded jaw dropped: together they were to steal the coin set aside as the tournament's prize.

A halfling by the name of Bernard turned out to be the thief. This supposed farmer took the coin and hid with it in one of the city's warehouses. The witcher raced after him and defeated him in a final showdown.

As for Sasha, she turned out to be a Nilfgaardian agent known as Cantarella. Her cover blown, she had needed the coin so that she could skip town. As part of my duties as a chronicler I must note that before she left, she spent a night with the witcher, conducting various covert operations until the break of dawn. 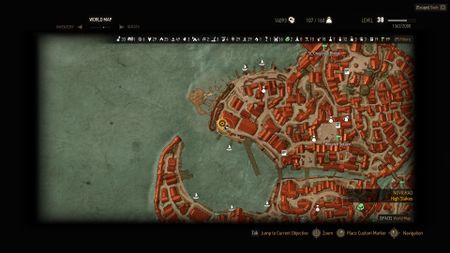 Location of the warehouse
Retrieved from "https://witcher.gamepedia.com/index.php?title=High_Stakes&oldid=419136"
Categories: