Hidden from the World

Hidden from the World is one of the treasure hunt quests in The Witcher 3: Wild Hunt. Its starting location is marked on the map as hidden treasure south-east from Marauders' Bridge in Velen.

They say the road to hell is paved with curiosity. The witcher, though, always held the road to riches is paved with the exact same stuff. Thus when he found a letter mentioning treasure, he decided to give it a long and careful read...

Listen up, you stupid git. Go on keeping the treasure out for all to see like that, we won't keep it very long at all. What, you think we're the only bandits around? Well, knowing what a fool y'are, perhaps you do, so here's me telling you – no. We ain't. So be a good little dunce and hide it somewhere where only you and me will know how to find it again. Otherwise I'll tan your arse till it's red as a watermelon.

Geralt realized the secret stash might be empty by the time he found it, but he decided to search it out all the same. And it's a good thing he did, for it was full of valuables. 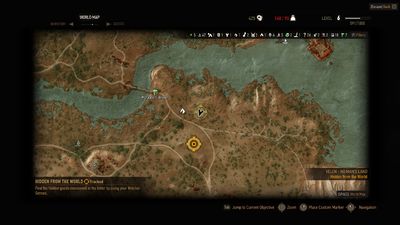