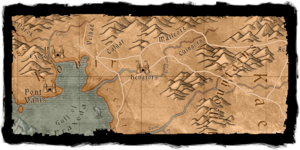 The city of Hengfors was, through its history, an independent city-state, the seat of power of margraves from House of Thyssen wielding the authority in East March, the historical capital of Caingorn and Audoen's kingdom, and, currently, the capital of the Hengfors League. King Niedamir rules from here. It is situated between the Dragon and Kestrel mountain ranges on the Braa. The city is a major crossroads.