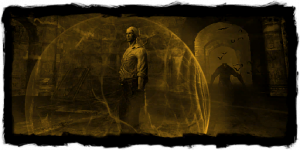 The Heliotrop Sign is a simple magical sign used by witchers. It is made by crossing one's wrists, and works as a buffer against strong physical and magical attacks. Geralt uses this sign in the short story "A Grain of Truth" to cushion the impact of the wall when Vereena uses a sonic attack against him.

He also uses the sign to protect himself (somewhat more successfully) from Yennefer when they first meet in the short story "The Last Wish".

Other time when he uses this sign is while a vigilosaur is attacking him in "Season of Storms" novel.

Heliotrop works as a shield against charms, spells, sounds and other energies directed towards it, but is useless against purely physical attacks.

Heliotrop Sign is the ultimate skill (Sense of Magic) on the Magic tree of Geralt's skill set. To use it you must fill the adrenaline bar by using any of the other Signs. Once the bar is fully charged, activate the Sign by pressing

(by default); adrenaline will reset to zero. The Heliotrop Sign creates a temporary immobile circular force-field area around Geralt, which considerably slows down everything inside the field except himself.