From Witcher Wiki
Jump to: navigation, search
For the online version, see: The Gwent wiki

On June 15, 2016 CDProject announced the development of a stand-alone Gwent: The Witcher Card Game. GWENT will be available at release for Xbox One, PC and PlayStation 4, GWENT is a free to play game that puts you, not your cards, in the center of the action. [1] Closed beta started in October 2016 for Windows and Xbox One. On May 25, 2017 CDProject announced the start of Public Beta of the game. [2]

Gwent is an ancient dwarven game that simulates the clash of two armies in battle. The players are generals, and the cards are their forces. Gwent players use their own customized decks. You can build one deck for each of the five Factions - Nilfgaard, Northern Realms, Monsters, Scoia'tael and Skellige. Each faction features a number of unique cards that encourage a different style of play. Each Faction also has a faction perk: 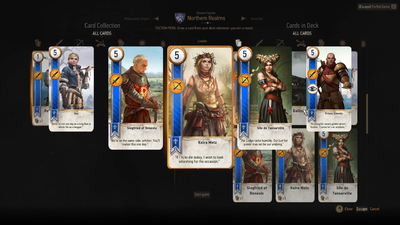 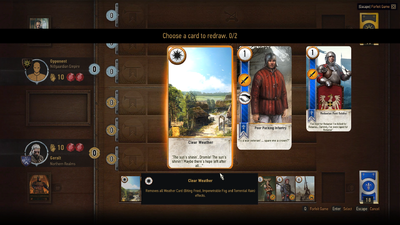