The griggs (also referred to as imps or forest spirits) are tiny humanoids who Caldemeyn blames for pissing to the milk. Once upon a time, priests from the Old Hermitage tried to convert some forest griggs, reportedly with little success.

Geralt encounters them in Murky Waters as part of the Small Problems quest. There appear to be at least two tribes of griggs: the so-called "good" tribe and a "bad" tribe. The good tribe inhabits the area between the currently ruined bridge to the fields and the riverbank, while the "bad" tribe has taken up residence in one of the deeper chambers of the crypt in the fields.

Even the good tribe seems to have a rather mischievous streak. It seems that these tiny creatures let their opinions on the local bridge construction be known through nightly vandalism, much to the consternation of the local mason, Harn and his son, Pat.

They mount cats and exhibit a marked appreciation for alcohol. They seem to worship or revere santons, where they hide their precious cat harnesses. Another important symbol for them is four-leaf clover – a man who carries it is uninterrupted by griggs during his or her work.

In the Blood and Wine expansion[edit | edit source] 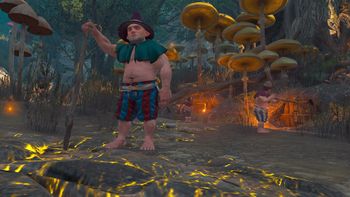 Griggs' village carved out in a tree can be found in Land of a Thousand Fables. Uninterrupted they cut mushrooms, hoe the ground and collect herbs, but if Geralt comes too close, they begin to run to their houses shouting squeaky.