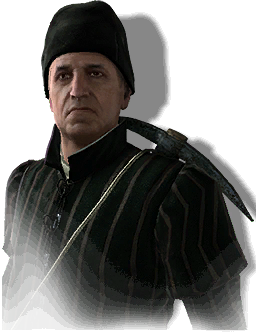 Gridley is a secondary character in The Witcher 2: Assassins of Kings.

Rupert's friend was in a dire state, lost amidst somber ruins in a wilderness forsaken by gods and humans alike. Geralt found him easily and learned more about him, including what had led him to take such risks.

Gridley had been stationed in the area during the war. His unit had tortured a Nilfgaardian soldier to death, all in the name of finding a treasure. Years later, the murdered man's wraith used its power to force Gridley and Rupert to return to the site of their crime.

If Geralt decides to give him and Rupert to the wraith:

Gridley shared Rupert's fate and paid for his past crimes, for Geralt decided that he would not stop the wraith from exacting revenge.

If Geralt decides to give him and Rupert to Loredo:

Geralt did not hand Gridley over to the damned soul, yet he decided that both Rupert and Gridley needed to pay for their deeds. Their fate was sealed when a certain woman intervened – the degenerates had committed other crimes for which they would now face punishment.

If Geralt tells him and Rupert to go away:

Geralt did not hand Gridley over to the damned soul, yet he drove him and his friend away, ordering the villains to leave the area immediately.

If the quest fails:

Subsequent events hit Geralt like an avalanche, so he never learned the end of Gridley's and Rupert's story. We can only guess at the fate of the two adventurers, but I leave that to the reader's imagination.