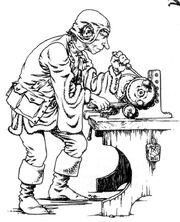 a gnome in Wiedźmin: Gra Wyobraźni

Gnomes are one of the humanoid races. Gnomes were the oldest sentient race on the northern half of Continent[1] and together with dwarves and elves are called the Old races. Gnomes are shorter and weaker than dwarves, but just as tough and more agile. They can be easily distinguished from dwarves and halflings by their long noses and pointed teeth as well as more slender shape of body.

Many gnomes live in Mahakam along with the dwarves, although others inhabit the Tir Tochair mountain range. Their society is said to be similar to dwarven clan structures, though less authoritarian, resembling large communes lead by people's assemblies and respected persons.[5] Members of this race are quite fun-loving, which is indicated by a saying "stir up trouble like a tipsy gnome". They often make excellent alchemists, smiths and metallurgists and their gwyhyr swords are considered the best in the world. Gnomish communities live in human cities as well, where their members work as jewelers, artisans or pawnbrokers. Immature gnomes often work as gofers and office boys for dwarven banks. Some gnomes, on the other hand, tend to prefer simplier ways of life and become burglars[6] or highwaymen.[8]

Little is known about the gnomish religion apart from the fact it allowed some of gnomes avoid conscription to the Nordling army by claiming a religious exemption.[9] It is speculated that they worship some deity preferring joint work for the common good over pointless fighting.[10] It is possible their religion is somehow connected to the advanced gnomish alchemy, especially by concept of the Sephirot which are said to be ten elements of the Tree of Life, or aspects of divinity mortals are capable of knowing.[11]

According to The Eye of Yrrhedes role-playing game by Andrzej Sapkowski, they are peculiarly hated by kobolds, being in a constant state of war with them. Two gnomish burglars appear briefly in Chapter 7 of The Ceasless Light novel, third part of his Hussite Trilogy.

In The World of the Witcher[edit | edit source] 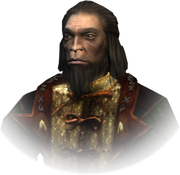 A. A. Kalkstein, alchemist rumored to be of gnomish origin

There are no gnomes in the game, although some of the characters do muse about origins of Kalkstein, an alchemist with a passion for gnomish alchemy.