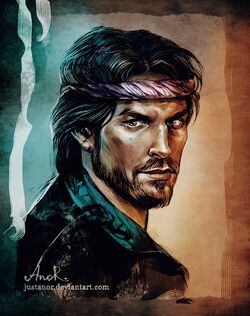 Giselher was the grim, black-haired and lanky ringleader of the Rats. Prior to joining the Rats, he had been press-ganged into the local army and subsequently deserted, becoming part of a separate gang before meeting Iskra and founding the Rats. He was Iskra's lover. The entire gang, with the exception of Ciri, was killed at the hands of Leo Bonhart in Jealousy.