The witcher Geralt of Rivia (Polish: Geralt z Rivii) is the main protagonist of the Witcher series of books by Andrzej Sapkowski and its multimedia adaptations (including CD Projekt RED's The Witcher game series). As an itinerant monster hunter for hire, he possesses nearly superhuman abilities and expert swordsmanship skills. By the events of The Witcher 3: Wild Hunt (in 1272), Geralt is "nearly a century old" according to mentor Vesemir.

Geralt is known also as Gwynbleidd (Elder Speech meaning "The White Wolf", a name which was given to him by the dryads), as well as the Butcher of Blaviken, after an unfortunate incident in that city.

Despite his title, Geralt does not hail from the city of Rivia. After being left with the witchers by his mother, Visenna, he grew up in their keep of Kaer Morhen in the realm of Kaedwen. In the interest of appearing more trustworthy to potential clients, young witchers were encouraged to make up surnames for themselves by master Vesemir. As his first choice, Geralt chose "Geralt Roger Eric du Haute-Bellegarde", but this choice was dismissed by Vesemir as silly and pretentious, so "Geralt" was all that remained of his chosen name. "Of Rivia" was a more practical alternative, and Geralt even went so far as to adopt a Rivian accent to appear more authentic.

Later, Queen Meve of Lyria knighted him for his valour in the Battle for the Bridge on the Yaruga conferring on him the formal title "of Rivia", which amused him. He, therefore, became a true knight of Lyria. 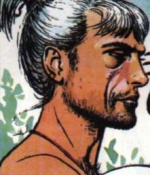 Geralt in the comic book, drawn by Bogusław Polch

Geralt was the son of sorceress Visenna and (presumably) a warrior called Korin. Shortly after being born, Geralt was taken by his mother to the Wolf School — the Kaer Morhen stronghold (from Elder Speech Caer a'Muirehen meaning "Fortress of the Old Sea"). Geralt survived numerous mutations during the Trial of the Grasses, through which he gained practically superhuman physical and mental abilities (increased reflexes, speed, strength and enhanced hearing) surprisingly well. Because of that, as one of the few he was selected for additional experiments, and of the few he was the only one that survived. His white hair, completely lacking pigment, is a side effect of these experiments. After finishing the witcher training, he embarked into the world on his horse called Roach (he gave the same name to every one of his horses) to become a monster slayer for hire.

Although Geralt did not believe in destiny, he demanded the unborn child of princess Pavetta and her husband Duny as a reward for his services. As the child turned out to be a girl, he did not take her. However, fate or blind chance caused Geralt and Ciri, the daughter of Duny and Pavetta to cross paths thrice, and after the death of her grandmother, queen Calanthe, Geralt ended up taking care of the girl and loving her as his own daughter. His best friend was Dandelion the bard, while his lover and the love of his life was Yennefer.

In the Polish Movie and TV series 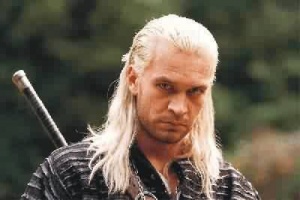 Michał Żebrowski as Geralt in The Hexer movie

In The Hexer movie and TV series, the major role of Geralt as an adult was played by Michał Żebrowski, but a younger Geralt was portrayed by Maciej Łagodziński. Both the series and the movie were based largely on the previously published short stories, taking a few liberties here and there with the narrative.

Naturally, Geralt appears in all thirteen episodes of the series and is the protagonist of the film.

In The Witcher computer game 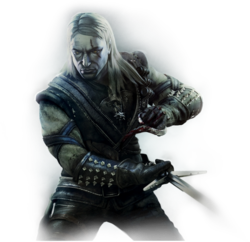 In the English version of the game, Geralt is voiced by Doug Cockle and by Jacek Rozenek in the Polish version.

After seemingly having been killed by a mob during a pogrom of non-humans at the end of the Witcher saga, Geralt returns to life with no recollection of the details of his sudden reappearance or the intervening five years. He is rescued by the last remaining witchers in the world and taken back to Kaer Morhen. There, he is drawn into a complicated conspiracy concerning the witchers, their secrets and the nefarious forces who are after that knowledge.

Geralt pursues the mysterious Salamandra, and in the process meets many people from his past, as well as new acquaintances who either require the witcher's help, or offer their own in his quest to regain his identity.

A book entitled "The Rivian Pogrom" claims that Geralt, known also as the White Wolf, died during a massacre of non-humans. The pogrom took place in the city of Rivia just after the war with Nilfgaard. Geralt was killed by an angry mob when he tried to defend the oppressed. The sorceress Triss Merigold and the dwarf Zoltan Chivay witnessed his death. The witcher's body was never found.

The bard Dandelion recounts the adventures of the witcher Geralt in his ballads. After reading them, one may conclude that the White Wolf was the most famous witcher of his time. He actively participated in many historical events, such as the mage rebellion on Thanedd Island. Dandelion's poems are mostly devoted to Geralt's fights against monsters, the numerous romantic entanglements for which he is famous, and to his love for a certain sorceress.

Some years ago, Geralt of Rivia came to King Foltest's court in search of work. He obtained a contract to free the monarch's daughter Adda from a spell which had turned her into a striga, or to kill her if all else failed. The witcher managed to free the girl from the spell, and discovered that one of the courtiers had been responsible for the curse.

In The Witcher 2: Assassins of Kings 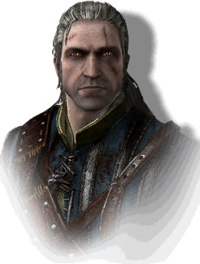 In the sequel, Geralt finds himself in the service of King Foltest of Temeria. The latter is soon assassinated, sparking a series of events that send the witcher along the Pontar in search of the kingslayers.

Behold our hero: subjected to mutations and rigorous sword and sorcery training as a child, he has become a superhuman monster slayer. Always penniless and often disdained by those whom he protects, he wanders the world seeking work. Fate has little mercy for him, piling obstacles in his way, yet he trudges on. He has more scruples than a beggaring bum has fleas. Doubts haunt him even when a band of ruffians, knives drawn, approaches him on the highway. Is he a good man? I do not think so. Does he try to maintain his humanity? I believe he does.

You must know that Geralt of Rivia died once already, or at least everyone thought him dead. During a massacre in Rivia, he sought to defend nonhumans and fell to overwhelming odds. Placed in a boat, he floated into the mist, into a realm where he finally found peace. Not for long. Because of forces to mentioned later, Geralt returned just in time to defend the witchers' ancient home fortress, and then embarked on a mission to recover the secrets stolen from it. Along the way he took part in a Scoia'tael uprising, shattered a powerful criminal organization, and killed the Grand Master of the Order of the Flaming Rose. All the while his fame as a lover grew. Well, that's Geralt for you. As if all this wasn't enough, he then foiled the attempted assassination of King Foltest of Temeria and became one of the monarch's most trusted men.

In The Witcher 3: Wild Hunt 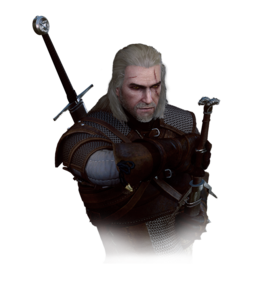 Geralt returns in the third and final installment of the game series. He is unshaven at the start of this adventure due to his recent travels in the wilderness, and the narrative is set after the initial Nilfgaardian invasion of the Northern Kingdoms.

Many cannot fathom the friendship Geralt of Rivia and I, Dandelion, have shared all these years. When we first began breaking bread together, spiteful tongues said he'd be better off cutting my throat and dumping my body in a hollow tree – before I provoked someone else into doing that same to us both. Those individuals spoke out of pure jealousy, for Geralt was my dearest friend, a fact which he gave ample evidence of on numerous occasions.

I could say a great deal about that world-famous monster hunter, the man know in Elder Speech as Gwynbleidd, or, in our younger (yet no less noble) tongue, as the White Wolf. For Geralt of Rivia is a truly exceptional individual. A brief encounter might tempt one to label him a mere swinger of swords, a simple monster-catcher, a rough-and-tumble practitioner of a dirty trade – but peer closer and you will soon discover he is a man of unplumbed depths, unique views and vast, world-spanning experience.

On the surface, he is introverted, tight-lipped, and one might even say gruff, but underneath lies an overflowing sea of goodwill, good humour, and an honest readiness to help his friends, be it with a bit of sound advice or the masterful application of his blade.

Setting aside cumbersome false modesty, I can say that I know his story better than any man alive. I was with him through hard times and good, helping with wise advice, warm words and razor wit. As a result, I am a vital part of his story, both in its earlier and present portions. It is thus my duty to continue my chronicle and, for the benefit of future generations, put in writing the next chapter of his deeds and exploits.

In The Witcher: Adventure Game

Geralt is one of the four playable characters in "The Witcher: Adventure Game".

He is called there "MONSTER SLAYER - DEADLY IN COMBAT".[1]

In The Witcher Battle Arena game

Geralt is featured as a playable character in "The Witcher Battle Arena".