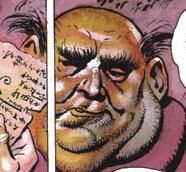 Fregenal was a druid before he was excommunicated. He created the first koshchey reportedly by using the Alzur's Double Cross, though possibly some other spell, and led the band of mercenaries known as Koshchey's Men. One of that group, a bobolak by the name of Kehl, betrayed Fregenal and helped Visenna and Korin destroy the koshchey.

Fregenal met his end at the hands, or rather axe, of Mikula. He features in the short story "Droga, z której się nie wraca" (A Road with No Return), as well as in the graphic novel based on it.