Ford is a river crossing in The Witcher 3: Wild Hunt. It comprises a sandy, rocky road, which crosses two small tributaries of Ismena. This is where Geralt and Vesemir encountered the griffin generally terrorizing the region, who had just attacked a merchant as they made their way from the ransacked village toward White Orchard village. When the witchers arrived, the griffin was devouring the merchant's cart horse. They successfully drove the monster off, but not before the beast had taken the dead horse.

The merchant then thanked the witchers and recommended the inn in White Orchard village. Unable to fix his broken cart, he abandoned it for good and took his goods to the same village. His cart could be seen later, if Geralt revisited the road, still stuck in the sand with a broken wheel but without its cargo.

On the west side of the Ford, one can immediately see the region's signature white-blossomed trees surrounding Dune Vildenvert and his brother's farm.

Before the war, merchants and travelers would cross the river here. Now only Nilfgaardian soldiers traverse this path. 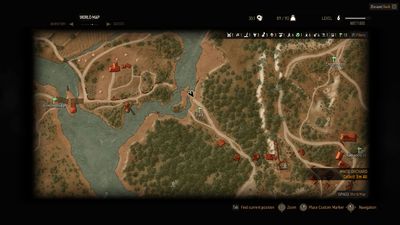