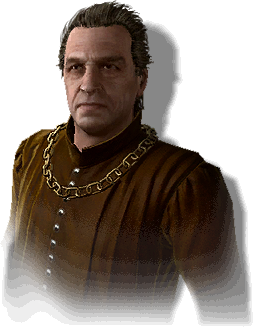 Fioravanti is a secondary character in "The Witcher 2: Assassins of Kings". He is a merchant and dice poker player who can be found at the south side of the main square in Flotsam, in front of Louis Merse's house.

A truly enterprising man, the merchant Fioravanti had found a niche that produced for him a decent income. Though his specialization was extremely narrow, this was the very key to his success. For the secret of commerce is to be the exclusive provider of a certain category of goods or services. Thus, Fioravanti was still in business despite his forced stopover in Flotsam.